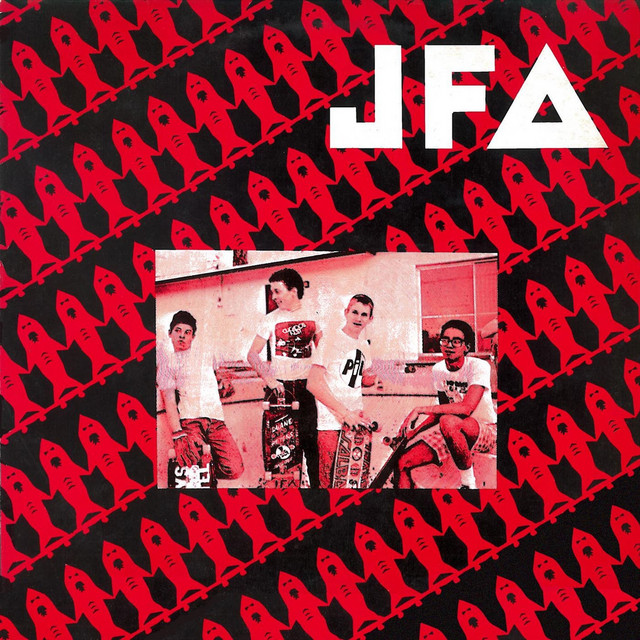 Phoenix, AZ, punk legends JFA (or Jodie Foster's Army) was assembled in 1981 by Brian Brannon (vocals), Don Redondo (guitars), Mike Cornielius (bass), and drummer Mike Sversvold. Separated as they were from the dying New York and U.K. punk scenes and the '80s punk hotbed in Los Angeles, JFA pursued their own brand of skatepunk that celebrated the suburban release sun burnt skaters experienced while carving swimming pools and desert pipes. JFA performed often in and around Phoenix in the early '80s, and by 1985, the group had released several records on the Placebo imprint: their debut 7", Blatant Localism, which has become quite a collector's item; the 12" Valley of the Yakes; an untitled 12"; the Mad Gardens 12" and the Live 1984 Tour 12". These early Placebo records were both successful and about as ambitious as the era's punk would get. The music certainly had a hard edge and all the restlessness and noise punk fans expect, but there were also some experiments and genre turns including nifty surf textures that were to that point unheard of in most punk circles. During the late '80s, JFA continued releasing discs for Placebo including the 7" My Movie and the 12" Nowhere Blossoms. The punk scene in Phoenix and L.A. fizzled a little in the late '80s and Placebo Records eventually went bankrupt, leaving the still-active JFA without a label home. Brannon moved to the Bay Area in 1990 to work at Thrasher Magazine, but continued to work with Redondo and new musicians Bruce Taylor on bass and drummer Mike Tracy. During this time, JFA recorded some singles and splits for a couple different labels including their own Buzzkill imprint. The new lineup performed occasionally around L.A., where Redondo had moved, to the delight of Southern California punkers, and eventually Brannon joined the rest of the group, moving down to L.A. himself. In 2000, JFA released their first full-length recording since the demise of Placebo, Only Live Once on Hurricane Records. Like their early work, this offering from the band demonstrates their adventurousness as well as their aggression: two qualities that have always existed in rare proportions for these old-school skatepunks. Surf elements, some keyboards, clever lyrics, and a zealous devotion to the skating ideals and lifestyle are what always separated this group, and earned them respect from punkers everywhere. ~ Vincent Jeffries, Rovi