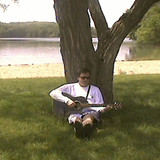 Friends of @Scott Cooley tell friends about Scott Cooley. Fans become fans because of friends. You may have read Scott Cooley is an award-winning songwriter, you may have read a review of his music, or you may have seen a picture of him online somewhere, but more than any marketed image, you will find fans share links to the songs, because that is really the only way to know what Scott Cooley is all about. The world of music is a crowded one, and it is really through recommendation that people become fans of new music - that is, after getting through their teens and twenties and past when the major three corporate record labels create what is popular and cram it down their throats via commercial radio and music video. Being into Scott Cooley is being into the music first and foremost, and it is a discovered taste someone cannot really coax you into. It is either for you or it is not, and many fans blew off that shared song link for a long time before finally getting around to it, perhaps because of the lack of accompanying visuals or publicity. Once they hit play a few times though, most were all-in. They became aware of Scott Cooley in the same way those who originally shared the music link with them did. The great thing is there is a large catalog to get around to (7 acclaimed full-length studio albums so far), and because of his consistent release output, every two years it grows again. What makes Scott Cooley stand out and earn a special place in the minds of his fans is his cleverly poetic, relatably irreverent lyrics that are at once intelligently sophisticated and blissfully simple; combined with an unplugged delivery of American rock instrumentation. You might know he is a 50-something year old white guy from Flint Michigan who grew up loving 70s hard rock and later taught himself to play instruments, write songs, and record himself in his home studio just south of Flint where he lives now. In an area where most people are obsessed with the loudness of the city, motors, car shows, violence, crime and rap music, Scott instead seeks out the quiet of the woods and lakes, enjoying sailing, skiing, and strumming an acoustic guitar. You will get lyrics dosed with plenty of escapism that also shows a great appreciation for the Midwest and Great Lakes region. His personal music listening tastes include a wide swath of Americana, so you will hear hints of the garage rock of the Stooges, Grateful Dead, Grand Funk Railroad or the White Stripes; the folk punk of the Violent Femmes; the classic country of Willie Nelson; the gulf and western of Jimmy Buffett; the Motown sound; the folk rock of the likes of Crosby Stills Nash & Young; the earlier rock and roll of the Beatles; the harder rock of Led Zeppelin; the heartland rock of Tom Petty, John Mellencamp and Bob Seger; and even the sounds of Jamaica, Hawaii and New Orleans. The high songwriting quality makes up for the lower recording quality and lower vocal/instrumental performance quality; and yet these songs are so refreshingly real that they are arguably better when heard in the DIY, lo-fi bedroom recording style than if they were to be done with autotuned vocals and looped virtual instruments. Cooley has a personality that is laid back, mellow and pleasant enough for those not paying attention to enjoy the overall vibe, but it is powerful and deep once a song hooks you into listening intently. There is also an element of humor that makes him delightfully different than the mainstream, in which you would be hard-pressed to find any other songwriter/recording artists who are attempting to do anything similar. So, whether it is the attitude, the acoustic-only thing, the genre flavoring variety, or the smile moments during his songs where you know he must have liked that same part for the same reason as you when he wrote and recorded it, there is a lot to like, and you are in a growing group of supporters who like Scott Cooley and are proud to have his music in their collections.