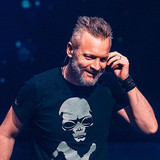 SYNC24 is the solo project of Daniel Vadestrid (né Segerstad) from Carbon Based Lifeforms . From the very beginning of his career Daniel has written tracks by and for himself. He wrote two self released albums under the name TiN. But for the most part he was busy with CBL, Thermostatic

and the lesser known acts T.S.R..   In 2005 he decided to start a solo project when he happened to have