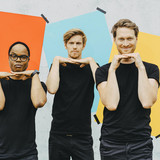 TYDES are a young disco-funk-pop band from Munich, Germany. In their sound Jerryl, Manu and Jo incorporate strong influences of the 70s and 80s funk and disco sound and melt it together with modern pop. A tight "four-on-the-floor" beat going right to the core and catchy melodies you will have a hard time getting out of your head. TYDES are all about good vibes and fun, which you will feel and experience.   On their Debut EP "Melodies" the band presented five songs indulging in the depth of the funk and disco worlds. From the moment you hit play, prepare to be caught inside a world of grooves and sounds, which make you forget about everything else. Let yourself be carried away to the sweet and funky melodies the Munich band has given us. Following this direction the next single "Hands Up" is a disco-infused good mood song, which brigthened up the summer of 2019.   The self-titled debut album "TYDES" (release October 2020) is a wide-ranging musical evolution. Incorporating a large portion of creativity and catchy hooks, the three musicians have increasingly incorporated their personal experiences into the new songs. TYDES have remained true to their unmistakable style and have raised it to a new level musically. The result is eleven distinct songs, which the band views as musical friends with different personalities. All songs were created entirely on their own and recorded, arranged and produced in her own studio.   Find them online: http://www.tydes.de