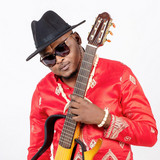 Hervé Nguebo is a guitar virtuoso who has accumulated 26 years of experience. He has participated in the production of more than 1000 musical works. In 1994, he began his musical career as a guitarist. From cabarets to the different groups he joined or formed, Hervé was immersed in very spirited rhythms until 2013 when he decided to return to his true artistic identity with his first solo world music album "Another Part Of Me". It should be noted that this is his second solo album and the fourth of his career. He returns at the end of 2018 with a new world music project called "Multicol'or". In December 2020, his third world project "Parodie d'amour" is being released on the 7th and the release of his fourth world project "Muayé" (The Light) is on the go, scheduled for the second half of 2021.