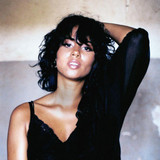 Mayra Andrade is an award winning artist from the West African islands of Cape Verde. Her music is as diverse as the places she has called home. She has lived in Cape Verde, Senegal, Angola, Germany, France and currently Portugal. She has honed the musical ability to bring her audience along this journey, with each album as a canvas, comes an accurate portrayal of a stage in her life. Her music presents traditional Cape Verdean rhythms with a different projection, breaking borders, creating precedents and always exploring new angles: “Navega” (2006), “Stória, Stória” (2009), “Studio 105” (2010) “Lovely Difficult” (2013). Her album “Manga” (2019) opens a new chapter and reveals a solar-intimacy, a unique alchemy between her voice, her history and the Afrobeats energy of a modern Africa. Each day freer and more emancipated of pre-established codes, the artist reveals the sensual portrait of a strong, modern and undoubtedly feminine sound.