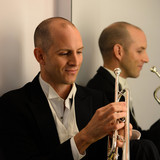 THOMAS HOOTEN is Principal Trumpet of the Los Angeles Philharmonic Orchestra. Prior to joining the Los Angeles Philharmonic, Hooten served as Principal Trumpet in the Atlanta Symphony from 2006-2012, where he was awarded the first ever Mabel Dorn Reeder Honorary Chair, a merit-based award for “excellence in musical artistry, leadership, collegiality and community engagement.” Hooten began his career in 2000 with a trumpet/cornet position in “The President’s Own” United States Marine Band in Washington, D.C. He went on to join the Indianapolis Symphony as Assistant Principal Trumpet for two years, and subsequently won the Principal Trumpet auditions for both the Houston and Atlanta Symphonies. He released Trumpet Call, his first solo album, in 2011.

In 2012, Jennifer Marotta and Hooten co-edited the latest release of the Completely Conservatory Method for Trumpet by J. B Arban, which is one of the most widely used trumpet methods in modern history.