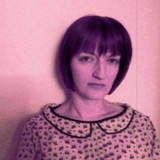 One of several C-86-style indie pop projects involving Glasgow's Lawrence "Laz" McCluskey, Strawberry Whiplash is primarily a collaboration between McCluskey and vocalist Sandra. Deriving their name from the bands Strawberry Switchblade and Meat Whiplash, the duo formulated a sweet, reverb-kissed sound that nodded to acts like Tiger Trap, Heavenly, and Black Tambourine. Making their first appearance on The Matinee Hit Parade, a compilation released in honor of that label's tenth anniversary, Strawberry Whiplash went on to release their debut EP, Who's in Your Dreams, in 2008. The duo then followed it up with another EP (2009's Picture Perfect) and single (2011's "Stop, Look and Listen") before releasing their debut album, Hits in the Car, in early 2012. After a couple years of inactivity, the duo returned in late 2015 with their second album for Matinee, Stuck in the Never Ending Now. ~ Tim Sendra, Rovi