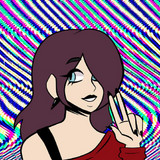 In a little over a year, Sonohara (Sarah Westervelt)'s new drum and bass/happy hardcore style has captivated listeners around the globe. Despite the moderate success of Nervous Wreck (including an award nomination), Sarah felt that the album, as well as the heavily punk-influenced style she had been pursuing since the Anonymous days, no longer suited the person she had become, and decided to craft something that was truly the way she felt she was. The first song to come out of these sessions, the critically acclaimed single "Alive", signified a rebirth for Sarah. She followed this success with more hits, including "Cult", "Satan's Awakening" and "Brighter", and her new album Finding Rhythm shows that she has truly developed a sound representative of her. "The name Finding Rhythm represents how i'm coming into my own, musicially, finding what I enjoy doing and what I don't", says Sarah. "It's unlike anything i've ever done before. I wouldn't really put it under anything I was doing before. It's just...Sonohara. Just me as a piece of music." This newfound approach has been putting even more eyes on Sonohara and is solidifying her as a new face that you should be watching. Brace yourselves, because she isn't taking prisoners.