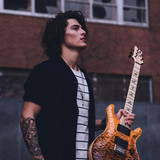 Jon Dretto is an independent 23-year-old artist based in Upstate NY who writes, records, and tours the United States performing live. You might recognize Jon from his many viral videos. He has accumulated over 1 Billion views across social media. Jon has gained more than 3.5 million, social media followers, across multiple platforms. Having just signed a deal with Samsung, Jon has been flying “coast to coast” across the United States doing production, commercials, and press events for the tech giant. Jon has a bachelor's degree in Music Business and a degree in Music Theory and Performance. Jon is known for his melodic playing, music theory background, in-depth chord knowledge, arrangements, and blistering solos. In search of a new sound heavily based upon the guitar, Jon is busy writing new original material to release to his newly gained family of “DrettoHeads”. Stay up-to-date with Jon's new content daily on TikTok and Instagram.