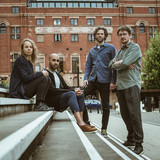 Let Spin are an egalitarian post-jazz four-piece whose members are active contributors to the fertile London, UK and European jazz scenes. Featuring Ruth Goller (Melt Yourself Down, Vula Viel), Chris Williams (Led Bib, Sarathy Korwar), Finlay Panter (Beats & Pieces Big Band, Sound 8 Orchestra) and Moss Freed (Union Division, Spike Orchestra).Since their inception, Let Spin have maintained an egalitarian musical ethos, giving each of them the opportunity to write for the project and have equal say over its decision-making. Yet, with their third album, Steal The Light, it is the progress they have made in developing their respective compositional voices and musical outlooks independently that has resulted in their most accomplished, experimental and meticulously-produced album to date.In experimenting with time and space, challenging their own compositional tendencies and striving for a more experimental production style, Let Spin have crafted a fluid yet focussed LP that reflects their maturity and ambition. Fans of the boundary-pushing projects led by Mark Guiliana, Petter Eldh, Anton Eger and Jim Black are certain to appreciate Steal The Light’s enticing sound world.