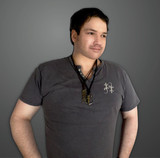 Felix Magnus Grossmann is a multi genre composer, who writes production music for for TV and film. Starting out as an EDM producer in Germany, he released a range of tracks since 2003 under differing pseudonyms. Taking on several pop projects and playing for multiple bands has earned Grossman experience in a variety of genres, which include orchestral film scores, jazz, pop rock and many more. Not only does Grossman have an extensive background in multiple genres, but he has also obtained a formal education in audio engineering from the SAE Institute in Hamburg. Wether he is playing the trombone, singing or sitting behind a piano, the resulting music is an intricate combination of artistic creativity and mesmerising precision that is sure to capture interest and inspire the imagination.

As far as Grossman is concerned, music is much more than a job or a pass time; it´s a way of life, a higher calling and the ultimate form of self-expression.