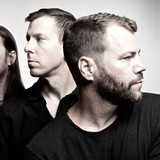 Early Day Miners' surroundings are reflected in their sound. Their early compositions mirror the slowly unfurling, seemingly inescapable expanse of the Midwest. There are generous hints at intimacy, but it is obscured intimacy. A change of place and the time between, from the basements of Bloomington to the Bywater of New Orleans, has yielded a subtle but correlative shift in the band. The Crescent City; its name is not only a reminder of its shape carved out by the river cradling it, but also a perfect allegory of a city forever in flux between the most contrasting aspects of the human condition, from light to dark. Within those darker quarters of experience lies the gold that Early Day Miners have labored to unearth with cautious vulnerability over the course of their eight albums. The internalized rumination that has characterized the band up until now has been exchanged for an open embrace of loss and sorrow and, perhaps even more courageously, joy. Unmistakable in that acceptance of all is a certain, audible lightness. Most notably Dan Burton’s voice, once hushed and at times hesitant, is now full-bodied and sure; his heart, once tenuously carried on his sleeve, is now firmly in his throat. And though this might be the leanest the lineup has been, they are focused and warm, exuding the maximalism of their new home with nuance and a laissez-faire approach. Early Day Miners sound as unhurried as ever, but never aimless; Early Day Miners have finally arrived.