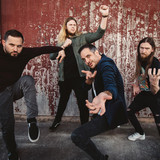 Osaka Punch has forged a reputation as one of Australia’s most wildly entertaining live acts. The group’s distinctive fusion of catchy grooves, jazz chops and a rock ethos sets them apart from most heavy acts, and allows an element of humour and satire in an otherwise very serious scene. . Reviewers have been keen to emphasise the crowd-captivating live antics of both the outfit and its charismatic and ceaselessly energetic front man Jack ‘Muzak’ Venables. . In 2017 the band completed 2 x East Coast tours supporting Lagerstein and Twelve Foot Ninja. They were also an official showcase act at BIGSOUND, and finished off this massive year by releasing the single How We Operate and taking off on a 10-date headline tour across the country. . 2018 began with the group touring extensively with The Butterfly Effect, with a majority of the 1200 capacity venues completely sold out. Their incredible live performances and professional attitude caught the attention of New World Artists, who put them on a follow up tour with Melbourne rockers Mammal. Throughout this 12 date tour, it was obvious that their fan-base is not only increasing in the capital cities, but also in regional areas. . 2019 showed no sign of slowing down with the release of the single Hall Of Shame to coincide with yet another sold out national tour with the mighty COG, and the release of their QMA-nominated track Drones. . Watch this space for what the future has in store - prepare to Feel The Punch!