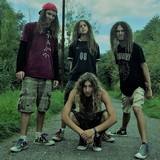 Featuring Mixed Up Everything

Formed in 2016 by brothers Todd, Kevin, Blake and Koby, Mixed Up Everything are a hard rock band from Melbourne, Australia.

The brothers first came to public attention through videos of their busking efforts in Melbourne, where they would play covers of alternative rock songs by artists such as Foo Fighters, Offspring and Metallica. To date, their Youtube channel has amassed more than 70 million views and the brothers' busking adventures have been covered by press throughout the world. Now touring Europe for over a couple of years, and continually blowing audiences away on the European festival circuit, Mixed Up Everything have a lot more to their name than "those busking street kids". They have become notorious for their live sound and transfixing performances. The new album "I Choose" will be released on July 30, behind the new music video for "Soak My Brain".