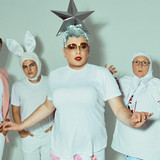 Ukraine's Verka Serduchka, played by comedian and musician Andriy Danylko, is a robust middle-aged woman from the small town of Poltava who dances, sings, makes unsavory remarks, and in 2007 won second place in the Eurovision Song Contest. Verka has created her fair share of controversy, but her supporters greatly outnumber her rivals, especially in Ukraine and Russia, where she is applauded not only for the great show she puts one, but for her truthful interpretation of national culture and character. Her popularity in Western Europe can be attributed to her can-do attitude with regard to foreign audiences, incorporating lyrics in English, French and German, and a formula of silly humor and positivity that while simple, has universal appeal. Like his character, Verka's creator Andriy Danylko comes from humble beginnings in the small town of Poltava, Ukraine. He first appeared on the stage as Verka in 1991 at a humor contest in his hometown playing a character remarkable for her blunt humor, expressed in a mixture of Ukrainian and Russian languages. Verka immediately connected with audiences and a concert tour of Russia followed. Other characters from Verka's world emerged including a teacher, a policeman, a soldier, and a female ballet dancer who performed together as the Danylko Theater. In the course of many performances Verka Serduchka became as the standout character of Danylko's repertoire, and took on singing and dancing, in addition to her comedy bits. She recorded several albums, including 1998's Ya Rozhdena Dlya Liubvi (I am Born for Love), 2001's Pirozhok (Pie), and 2002's Best. The popularity of Danylko's comedy shows began to peak in 2002 with his "I am a Revolution" tour of the Baltic states and former Soviet republics, and in 2003 he was awarded the title of Honored Artist of Ukraine. From 1997-2000 a talk show featuring Verka and guests from the world of entertainment titled SV Show (Sleeping Car Show) appeared on Ukrainian and Russian TV, but Danylko abandoned the project because of increased demand for live performances. In 2003, 500,000 copies of Verka's album Ha-Ra-Sho (Go-oo-ood) were sold, and in 2004, Verka and her entourage embarked on a tour of 17 American cities. In 2005, Ha-Ra-Sho was named the album of the year in Ukraine, and by 2006 it has sold over a million copies in Russia and 500,000 in Ukraine. Her next three albums, 2003's Chita Drita, 2006's Tralli Valli, and 2007's Dancing Europe had equally warm receptions. In 2007 Verka was chosen by the Ukrainian people to represent the nation in the Eurovision Song Contest, performing the number, "Dancing Lasha Tumbai." Many Ukrainian nationalists opposed the choice, viewing Verka as a disgraceful illustration of Ukrainian national identity, but her immense popularity overwhelmed their objections. In addition to a second place finish in the competition, her performance precipitated a political scandal. The controversy was over the made-up phrase "lasha tumbai," which the artist claimed meant "whipped cream" in Mongolian but Russians interpreted politically as "Russia goodbye." Verka was barred from performing in Russia, but denied any political statement aimed at Ukraine's neighbor. In the wake of her Eurovision success Verka announced her plans to run for political office and hold party meetings at the circus. Despite an initial show of enthusiasm on the part of voters, the pop star's political aspirations were snuffed by lack of funding. Verka has eclipsed other members of the Danylko Theater, the name Andriy Danylko now synonymous only with Verka Serduchka. But Danylko enjoys a side career as an ambient piano musician and in 2005 released the album Posle Tebya (After You), letting listeners see a different side of him. Like Danylko's off-stage persona, the album is understated and solemn, in stark contrast to the musical works of his scandalous alter-ego, Verka Serduchka. ~ Sabrina Jaszi, Rovi