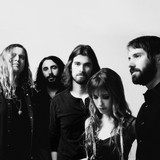 Combining indie rock with contemporary folk and a dash of chamber pop, the Lonely Wild are a band from Los Angeles, California's Silver Lake district, founded by singer and guitarist Andrew Carroll and multi-instrumentalist Ryan Ross, who is proficient on keyboards, guitar, bass, and trumpet. Carroll and Ross had previously worked together in the band You Me & Iowa, which broke up in 2009. A year later, Carroll had been writing songs and approached Ross about helping him work out arrangements for them. As it happened, Ross had also been working up new tunes, and the two decided to start a new band to showcase their material. After inviting their friend Jennifer Talesfore to help with the vocals, they recruited guitarist Andrew Schneider and drummer Edward Cerecedes, and the first lineup of the Lonely Wild was complete. In early 2011, the group released their debut EP, Dead End, and supported the release with plenty of live work on the West Coast. In 2012, shortly before the band began work on their first full-length album, Jennifer Talesfore left the Lonely Wild and Jessi Williams joined in her place, taking on vocals as well as bass, keyboards, guitar, and trumpet. The album The Sun as it Comes appeared in the spring of 2013; by the time it was released, Edward Cerecedes had parted ways with the Lonely Wild, and David Farina became their new drummer. (A few months before the album dropped, the group released a download-only concert album, Live at the Echo, in audio and video formats.) After extensive national touring, the Lonely Wild launched a crowdsourcing campaign to finance the recording of their next studio album. The project was a success, and their second full-length album, Chasing White Light, was released in September 2015, with distribution via Entertainment One Music. ~ Mark Deming, Rovi