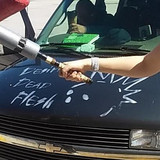 Desiring Dead Flesh is a DIY punk band from Bay City Michigan. Desiring Dead Flesh began in the summer of 2000. Bryan had been throwing shows and running sound in Mid-Michigan scene for many years, so Desiring Dead Flesh always tries to be a band with the 'scene ethics' that venues and other bands like to do shows with. Over the years the band as seen many member changes bringing the current line to include Bryan's son Adam on Drums (age 18 - joined in 2009) and his daughter Ravyn on Guitar (age 16 - joined in 2013). The summer of 2019 brings more changes as the they empty their apartment and move into the van to live life on the road, seeing friends and the country, and playing shows. Musically Desiring Dead Flesh likes short, fast, energetic old school hardcore punk songs. While singing about what “we love and hate” about the scene, family, faith, depression, society, with some humor thrown in. At a Desiring Dead Flesh show the band has fun and likes everybody at the show to have fun with them - singing gang vocals, circle pits and releasing some pent up energy. Current Line Up Is: Words: Bryan Hampton Drums: Adam Hampton Guitar: Ravyn Hampton