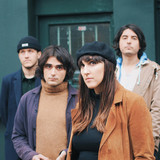 Pitched between infectiously melancholic indie-pop and angular, post-punk inflected stomps, Hadda Be is Amber, Ben, Matthew and Oliver. The band was formed under the name Foundlings in 2018, spread across joint hometowns of South London and Brighton. Their first two singles, Misery and Horizon, received generous airplay on BBC 6 Music and Radio X, as well as Melita Dennett’s BBC Introducing the South. The following year saw the release of the band’s debut, eponymously-titled EP via their new record label, Last Night From Glasgow. In 2020, with the departure of the band’s original bass player, a new member, a recent introduction to parenthood, a debut album in the works, brexit-induced political turmoil, coronavirus and a US trademark dispute to boot, the newly replenished four-piece made the change to Hadda Be. Taken from Allen Ginsberg’s poem Hadda Be Playing on the Radio, the new name reflects a fresh outlook for the band, a keener understanding of its sound and a heightened sense of purpose. The aptly titled Another Life, the band’s forthcoming debut album, was recorded in five days at Brighton Road Studios in between the two national UK lockdowns. The intention of the album was to create a body of work that captures the energy and spirit of the band, something that sets them apart: “There’s a vibrancy and an energy to our live shows, a distinct personality that we wanted to immortalise in our debut album."