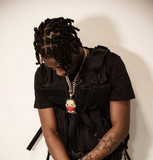 Ibrahim Kabba, also known as ZoeZoe2Fresh, was born in Sierra Leone, West Africa, on September 26, 1998. At two years old, he immigrated to Edmonton with his mother, Aminatu, due to the civil war in Sierra Leone. Growing up to a single mom, Kabba's mother worked two jobs to provide for him and herself. Her dream was to ensure Kabba received a good education under the jurisdiction of a Christian school where he could follow the footsteps of a God-fearing man. Kabba soccer and basketball passion grew immensely during his high school years, which played a significant role in life.   At 16, Kabba decided he wanted to quit sports and focus on his calling for music. At 17, he wrote his first single title 'No game'; from there on, his music career sparrow beyond his imagination. He was discovered by Tiger Smith, owner and founder of RaxxonRaxx Record Label/Entertainment, later signed him to his record label due to his talent, passion, drive, dedication, and love for music. Kabba has performed and opened up for some well-known artists in Edmonton, such as SPICE, TIMAYA, DEMARCO, 2FACE BABA, MR P/PSQUARE, and performed with LB SPIFFY.