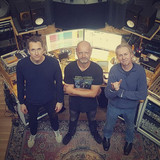 Zeup is a Danish stoner rock trio based in Copenhagen. They create groovy, heavy and strait-to-the-point rock tunes. Zeup (pronounced "soup") was formed in 2018 by Jakob Bach (guitar, vocals), Morten Rold (bass, backing vocals) and Morten Barth (drums). The three Copenhageners share a passion for honest "analogue-sounding" rock songs. The musical style of Zeup contains elements of stoner rock, punk rock and grunge, and it is obvious that the band’s song writing draws on the legacy of rock icons of the 70s such as Black Sabbath and Led Zeppelin. In October 2019, Zeup recorded a 3-song demo EP at the legendary Sweet Silence Studios in Copenhagen (Metallica recorded Ride the Lightning and Master of Puppets there!). The following year, the band returned to the same studio to record the EP Blind. The EP is unmistakably Zeup; heavy guitar riffs, lots of groove and energy – all wrapped up in a warm and organic-sounding production. Blind contains both up-tempo rock songs (listen to the EP's opening track Illusions) and heavier riff-based songs such as Belief and Who You Are. The final track on the EP – the title track Blind – has an almost bluesy feel to it. Zeup insists on recording their music "live in the studio" without the use of click tracks, samples, auto-tune or other digital magic tricks. Only very few bands use this approach nowadays. The result are authentic and dirty-sounding rock songs.