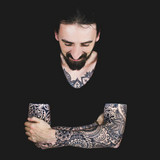 Aaren San is a music creator based in the Black Forest / Germany. In the 90s he discovered his love for music – the energy that music holds and gives. Music that can be so incredibly different in its numerous forms. Music that lets you discover open space. Being creative, discovering musical expressions and not making a big thing out of it - that's his driving force. Due to great successes in 2005 - 2010 and appearing in various charts worldwide - numerous live appearances followed in the United States, Brazil, the United Kingdom, France, Ukraine, Switzerland and Germany.