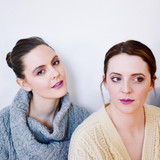 The Twins of Franklin

The Twins of Franklin are not, in fact, twins. They are two dear friends and Minneapolis musicians - Becky Shaheen and Laura Lou. But after being regularly mistaken as such for years as best friends, roommates, and each other’s solo backup singers, they decided to embrace the label when they formed their new act. Turns out, a decade of singing together means the pair can do some pretty neat things. Like delivering tight, delicate harmonies that can suddenly become one world conquering belts or even encouraging a group singalong when covering your favorite Goo Goo Dolls song. To the Twins, nothing is more fun than music-ing together, as a duo or as a full six piece band. That’s the feeling you’re let in on when experiencing the Twins of Franklin’s delightful ballads and zesty uptempo folk songs live. Their debut album "Low" was released in February 2020 to wide praise, and though the pandemic ceased live performances, it did not stop them from writing and creating new music. Expect more music from The Twins in the very new future!