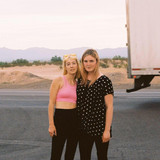 Ever heard something that sounded so much like a great band name that you were tempted to form a band just so you could use it? That's how the feminist indie pop trio Daddy Issues first came together. In 2014, Jenna Moynihan was attending a show at a D.I.Y. venue in her home town of Nashville, Tennessee called the Farm when she saw someone had written "Daddy Issues" in large letters on the bathroom wall. Moynihan was quite taken with the phrase, convinced it must be the name of a group that had appeared at the Farm. Some online research convinced Jenna that was not the case after all, so she decided she'd form a band and call it Daddy Issues. Moynihan rounded up a pair of like-minded friends, Emily Maxwell and Jenna Mitchell, and even though they didn't have much experience on their instruments, soon Moynihan was holding down lead guitar and vocals, Maxwell was playing drums, and Mitchell was their bassist, playing music that was part punk, part pop, and part grunge. Daddy Issues released a single, "Pizza Girl," in May 2014, with "Ugly When I Cry" following in September. By the summer of 2015, the band had attracted the attention of Nashville-based indie label Infinity Cat Recordings. The label gave Daddy Issues a break by releasing an eight-song cassette, Can We Still Hang, as part of their subscription cassette series. The trio soon struck a deal with Infinity Cat, and a split single with White Reaper was released in December 2015. Daddy Issues devoted much of 2016 and early 2017 to live work, including tours with Tacocat and Diet Cig, and in May 2017 they released their first full-length album, Deep Dream. ~ Mark Deming, Rovi