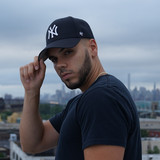 Rob was born in The Bronx, New York to Albanian Croatian parents. He began his career rapping and gaining notoriety on social media platforms such as Myspace which landed him on national television performing on hit shows on MTV such as My Super Sweet 16 and Rapfix. Rob Twizz also began creating comedy cyphers on his youtube and in partnership with Worldstarhiphop tallying over 15 million views. He has been heard on major platforms such as Hot 97, Shade 45, Thisis50, VladTV and so on. Stay tuned for new music.