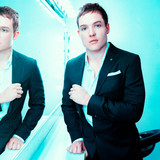 Through his extensive discography that includes five full-length albums, countless singles and remixes, and numerous EPs across diverse genres, tyDi topped global charts, toured the world and made an indelible mark on the music world. Since his time at Australia’s prestigious Queensland Conservatorium of Music, where he received a bachelor’s degree in music and music technology and subsequently “Young Outstanding Alumnus of the Year” for his contributions to the music industry, Illingworth has continued branching out to multiple arenas of the music field. Last year, the prolific Australian producer/DJ made waves with his acclaimed collaboration with Grammy-winning composer Christopher Tin, resulting in the epic album Collide, ‘a masterful navigation of orchestral and electronic elements’ according to Dancing Astronaut. The album also received accolades in DJMag, The LA Times, as well as placement on Friday Cratediggers and New Music Friday USA Spotify playlists, and hit both the Billboard dance and classical charts. tyDi has also contributed his own reimagined arrangements of some Disney most beloved anthems for the current 'Disney on Ice' world tour. He has also composed commercial music for Stella Artois, Quickbooks (their 2019 Oscars ad) and