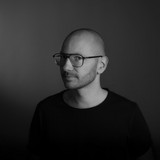 Rather than waste words, Marek Hemmann has always preferred to let his music speak for itself. Groovy House, minimalist Techno, sonic sensitivity and an unbridled joy in melody unite to speak of restless days and magical nights, tearing holes in the cloud cover and carrying sun beams to the deepest cellar. However camera-shy Marek Hemmann may be - he always risks something in his tracks. Marek Hemmann’s particular sound developed over time: an essentially reduced but still expressive electronic dance music, aware of its origins, though always pressing new boundaries of sound. Deep bass meets voice fragments, shakers and percussion carry the rhythm - funky minimal techno leaves plenty of free space for other musical elements. Always in search of the perfect groove, and catchy melodies that resonate for a long time. Over the years, Marek Hemmann has written countless musical treasures into the repertoire and more than earned the moniker „unique”. He makes space and sound accessible to people by crafting it in his own way, and remains above all the explorer of a genre in which he and his music are long-anchored, but never stagnant. Like his studio productions, his live shows direct the focus first and foremost to the floor, but are always augmented by a very particular, musically sensitive ease. A sound not only difficult to resist, but which tells us more about Marek Hemmann than words ever could.