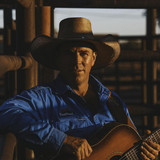 Tom Curtain began playing guitar and writing songs in 2001 while working on a cattle station in the Northern Territory, Australia.

The rhythm of the horse’s hooves while mustering cattle, became the beat for the melodies that played in his head. Tom's third album ‘Territory Time’ debuted at No.1 on the Australian iTunes Country Albums Chart in November 2017. The first single ‘Never Never Land’ (a duet with Luke O’Shea) won two Golden Guitars at the 2018 Country Music Awards of Australia. Tom also won 2018 Southern Stars Independent Country Music Artist, Male Vocalist, Album and Single of the Year. In 2018 Tom released the single 'Speak Up' that was inspired by tragic passing of Amy 'Dolly' Everett who took her young life at 14 years of age after being relentlessly cyber-bullied. The song was co-written and produced by Garth Porter, and is a duet with Sara Storer. The iTunes Chart topping single has raised over $20,000 for Dolly’s Dream. Tom’s latest single ‘We’re Still Here’, was co-written and produced by Garth Porter and commemorates the strength and resilience of farming families and their communities.