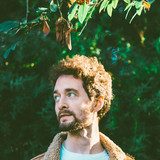 Writing lushly arranged and lyrically arresting songs has been a lifelong mission for Danny Green, aka Laish (pronounced Lie-shh). Danny sings with a distinctive voice that is most engaging in the lower register. His lyrics are as heartfelt and nakedly honest as they are often hilarious. 2020 saw the birth of his new band, DG Solaris, started with his wife LG - who release their first album on June 19.   Danny started Laish in 2007 in Brighton, England, falling in with the now legendary Willkommen Collective, an unusually talented group of songwriters located by the sea. Danny paid his dues drumming with the 12 piece prog folk band, Sons of Noel and Adrian, while eventually gathering a dedicated following to Laish, his own songwriting outlet.   The first self titled album was released on Willkommen Records and was recorded at Danny's home. It is an understated lo-fi gem.   The second album, Obituaries, on Folkwit, displays a more ambitious approach to arrangements.   Third album, Pendulum Swing, released at the end of 2016, on the hip French label, Talitres (once home to The National, Micah P Hinson), shows a further step forward into more electric guitar led, indie pop territory. Still an acoustic songwriter at its centre, songs like Learning to Love the Bomb, captured the imagination of Steve Lamacq who gave it many plays on his BBC Radio show.   Fourth album, Time Elastic via Talitres, was also released to ecstatic reviews and is considered perhaps their best album.