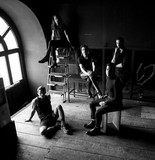 After a year of creating music together between 2014-2015, Magpie Jay kicked off its journey with their first album titled “Monte Claro” , which paid tribute to one of the band’s favorite places for making music, inside an old royal farmhouse located in the province of Guanacaste, Costa Rica. Their first LP was recorded in Conquista Records soon after the band made frequent monthly visits to Monte Claro. By 2015, Magpie Jay released their first single video titled “Sexy Sinister Sex” prior to their album release later in April. “Today’s Conversation”,“Lourdes”, are part of the series of single videos along with live-session program Conquista Sessions done during this time for Magpie Jay’s visual work of art.   "Islita" is Magpie Jay’s second album title. For second time it resembles a place from Costa Rica where the band felt inspired and comfortable working together. The process finally made 17-recorded songs, but the band’s second LP consists of 14 songs. Their latest album "Tragaluz" was released February 2019 with a concert at the National Theatre of Costa Rica. It consists of 10 new tracks produced by Miguel Pacheco and Giancarlo Tassara who was also responsible for the mix and master with the help of Felipe Perez from 424 and Achará.

There are also two tracks that have live versions from a performance at El Salón Dorado in the Museo de Arte Costarricense.