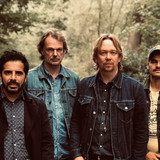 Van Dik Hout is a rock band from the Netherlands best known for their 1994 single "Stil in Mij." In 2000 “ Stil in mij “ won the title “ song of the century “ . The members also formed the band De Poema's, where they had a hit with the song "Zij Maakt Het Verschil" in 2001. In 2019 the band not only celebrated 25 years Van Dik Hout but released their first album in 5 years 'Een Nacht Eeuwigheid', released a documentary with Sony Legacy of Music and Videoland and will see their biggest hits being rereleased by some of the biggest current Dutch hiphop acts.