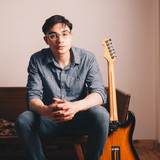 An Austin, Texas native who moved to the East Coast, Jerome Goosman is a hired gun guitarist turned singer-songwriter. Best described as a little bit pop, a little more blues with a hint of folk, and a touch of alternative, he combines his old school guitar style with more contemporary sounding music. After attending university in Connecticut and earning a local name for himself in the New York Area as a sideman, he began his journey as a songwriter in the middle of his musical career. Writing was a way for him to work things out in a life that could never seem to settle in one place, and as a way to get out of his head those catchy melodies that kept on popping up. For his latest release "Any Sign of Life" (2021), Jerome teamed up with American producer, arranger, songwriter, and guitarist Russ DeSalvo (whose credits include music by Celine Dion and Lionel Ritchie). Jerome frequently collaborates with other artists as well, the most recent being fellow Connecticut singer-songwriter Corey Lewin. The duo currently has two singles under both of their names, Gettin' Older and One Way Road, both released in 2020. Since 2017, Jerome has also been recruited as the lead guitarist for critically acclaimed folk singer Sawyer Fredericks (who was the winner of NBC’s TV show “The Voice” season 8 in 2015). He is currently credited on two albums of Sawyer’s, Hide Your Ghost (2018) and Flowers for You (2020).