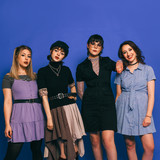 Taylor Kraemer (she/they), eventual vocalist and keytarist of VIAL, returned with purpose from a Minneapolis house show in 2019. Inspired by the lack of a specific sound that night, she brought in two friends from after-school music lessons, guitarist/vocalist KT Branscom (they/them) and bassist/yeller Kate Kanfield (they/them). 24 hours and a band Tinder account later, VIAL matched with drummer/vocalist Katie Fischer (she/they) after being stunned by the pep band snare on her profile. This speedy start gave way to fierce momentum: releasing debut LP Grow Up to critical acclaim the same year, being crowned Best New Band by their hometown’s City Pages the next, and charming a growing audience on TikTok on the road to their sophomore album. VIAL began by writing music they wanted to hear. It was only a matter of time before people clamored for more.