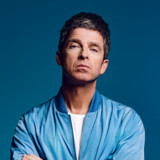 Noel Gallagher’s High Flying Birds first emerged in 2011 with their eponymous album released in October that year. The album went double platinum in the UK and has sold over 2.5 million copies worldwide. By the time a follow up album was due for release, Noel Gallagher's High Flying Birds live show had already surpassed playing 150 shows in 32 different countries. The follow up album ‘Chasing Yesterday’ was released in March 2015 - the first album to be produced as well as written by Noel. It spawned live favourites 'In The Heat Of The Moment' and "Lock All The Doors". A third album, ‘Who Built The Moon?’, was recorded in sessions spanning 2 years with renowned producer, DJ and composer David Holmes in Belfast and London. It was released in November 2017. The album debuted in UK at #1, achieving gold certification in less than 2 weeks from its release – making a hat trick of Number 1 albums for Noel. Live, Noel continued to tour the world relentlessly, encompassing landmark open air shows and festival headlines, performing a selection of songs he's written and released over the past three decades, this time with an expanded 11 piece band. ‘Who Built The Moon?’ was also a record-breaking 10th consecutive chart-topping studio album in the UK for Noel – no other artist has achieved such a feat. In June 2019, NGHFB released the "Black Star Dancing" EP, influenced by "David Bowie, INXS, U2, Queen, Indeep and ZZ Top”. This is the 1st of a series of 3 EPs to be released this year.