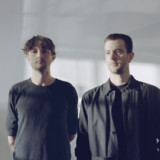 Wide-screen minimalists Portico Quartet have created their own singular, cinematic sound over the course of six studio albums. From their 2007 breakthrough ‘Knee-Deep in the North Sea’ through to ‘Memory Streams’ in 2019, they continue to resist categorisation. Their new album, Terrain unfolds slowly over three movements. Drawing on ambient music and American minimalism, it is both a meditation on the troubled times we find ourselves in, as well as a paean to hope, and counts as the one of the most artistically free and beautiful they have ever recorded.