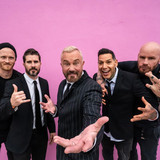 Los Angeles quartet Goldfinger helped contribute to a U.S. ska-punk movement in the mid- to late '90s along with Rancid, No Doubt, Sublime, and The Mighty Mighty Bosstones. The group was originally formed in 1994 by guitarist/singer John Feldmann and bassist/singer Simon Williams (who were both working at the same shoe store at the time), in addition to drummer Darrin Pfeiffer.

A friend of Feldmann's, Charlie Paulson, signed on shortly thereafter, playing his first show with the group just a day after being given a tape of their songs to learn.