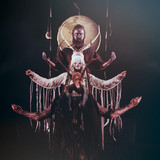 joined the project. Calling their style "amplified history," in 2015 they self-released their debut album, Ofnir, which quickly attracted attention. But their big break came at 2017's Castlefest in Lisse, the Netherlands, where they brought the house down with a unique ritual performance to a 10,000-strong crowd, filling the stage with guest performers all clad in ancient furs, bones, and antlers. Amazingly, it was their first ever show. The performance was filmed and made available online, the trio signed to Season of Mist in the fall of 2017, and released the recording as their second album, Lifa. The label reissued Ofnir in 2018 and put out Heilung's second studio album, Futha, the following year. Futha (2019) Ofnir (2018) Lifa (2018)