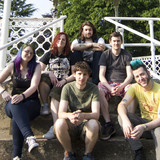 Chunky chords, heavy riffs, fiddly widdles, driving drums and an awe inspiring triple horn call to arms; Lead Shot Hazard have been making ska/punk, heavily influenced by the likes of Less Than Jake, Streetlight Manifesto, Capdown, T//Alan, Mad Caddies and Sublime (to name a few), since 2011. Lead Shot are about as DIY as you can get – the recording, mixing, CD pressing, merch design and printing along with all other aspects of management is produced by the band themselves. Everything you purchase from LSH is proudly hand-made and hands-on. Having shared stages with the likes of The Selecter, King Prawn, Fandangle, Jaya The Cat, New Town Kings, The Toasters, Sonic Boom Six, Beat The Red Light and Voodoo Glow Skulls, and upon being very well received at Boomtown, Level Up Festival and Herofest, the band have been recognised for their efforts in keeping the ska/punk scene alive and well.