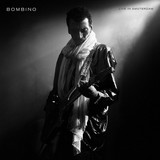 Meditative and earthy, Niger-based musician Bombino evokes the expansiveness of the Sahara in his work. Born in 1980 as Goumar Almoctar in the nomadic Tuareg encampment Tidene, Bombino came of age during stretches of intense political upheaval. He fled with his family to Algeria in 1990 and returned to Agadez in 1997. In 2007, after political unrest grew in Niger, Bombino fled the country again, this time to Burkina Faso. Filmmaker Ron Wyman tracked Bombino down in 2009, hoping to assist with a proper record. In 2010, Bombino returned to Niger to perform a celebratory concert at the Grand Mosque in Agadez. Released in 2011 and cited as one of NPR’s best discoveries of the year, Agadez showcased Bombino’s captivating vocals, trance-like guitar playing, and evocative rhythms. Bombino recorded his second album, Nomad, in Nashville with the Black Keys’ Dan Auerbach. Released in 2013, Nomad is a funky, elegant, gritty mesh of Delta country blues with psychedelic rock. Think Jimi Hendrix meets John Lee Hooker. Bombino’s third album, Azel, produced by David Lonstreth of the Dirty Projectors, was supposedly recorded in one or two takes without fail. In 2017, Bombino and his group recorded their latest album, Deran, in Casablanca, Morocco. Deran represents the artist’s most polished and intimate album to date. The record was nominated for Best World Music Album at the 2019 Grammys, the first ever nomination for an artist from Niger.