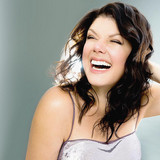 Blessed with “a voice of phenomenal beauty” (Stephen Holden, New York Times), Jane Monheit has had plenty of milestone moments in establishing herself as one of today’s best and most important vocalist-musicians. She was raised in Oakdale, New York, on Long Island’s South Shore and spent her childhood summers at the Usdan Summer Camp for the Arts, from which she received a distinguished alumna award (other notable alumni include Natalie Portman, Mariah Carey, and Taylor Dayne). Jane went on to study voice at the Manhattan School of Music with Peter Eldridge, a founding member of the vocal group New York Voices. She graduated with honors in 1999 and received the William H. Borden Award for outstanding accomplishment in jazz. It was at MSM that she met her husband, drummer Rick Montalbano. They married soon after college. As a critically acclaimed vocalist, Jane continues to perform with her three-piece band, currently consisting of husband Rick Montalbano (drums), Michael Kanan (piano) and Neal Miner (bass). Jane and Rick have one son and make their home in California. Her latest recording, "Come What May," released March 12, 2021 on the Club44 Records label.