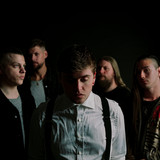 From Sweden with love Fronted by vocalist and violinist Eddie Berg, guitarists Harald Barrett and Alex Arnoldsson, drummer Peter Hanström and bass player Christian Höijer; Imminence releases an astonishing visual experience with their new, hard hitting single ”Temptation”. Following the release of ”Turn The Light On: Deluxe Edition”, an album era that has acted as a significant milestone for the band, where Imminence took the step from being a promising up and comer to an established headline act, ”Temptation” is the first new, heavy track the band is releasing in almost two years. Imminence was formed in the southmost part of Sweden and have over the years become one of the country's most promising acts with a diverse sound and universe, embracing everything from metalcore to acoustic music. Founded in 2010 by Eddie and Harald when they were just teenagers, the band grew organically with a constantly expanding fan-base all over the world while touring actively in Europe since the release of the band's breakthrough single ”The Sickness” (2015). Imminence has released three studio albums, ”I” (2014), ”This Is Goodbye” (2017) and ”Turn The Light On” (2019).