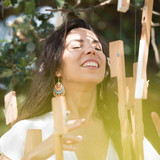 Dad was a well respected violin player from Bulgaria who played in the national orchestra and later became koncertmeister in Germany. Mum was touring as a dancer with the world famous choreographer Maurice Béjart, who used the orchestra for the German leg of the tour. That’s where it all started.   Growing up in an artistic family …   So I was Born in Germany, then moved to Belgium at young age and mainly spend my youth there. After my graduation at the Royal Conservatory in piano and chamber music I went to Berklee College of Music in Boston to study film scoring and composition. When I finally got back to Europe I ended up in Nice at the French Riviera. Sun, Azur blue sea, fresh air … Good times!   It was an inspirational place to be, but not enough music vibes to my taste. So 5 years later I decided to explore London city, the epicentre of music in Europe, and pursue my musical dreams.     About 12-13 years ago I wrote a lot of piano solo songs. But at the time, I felt they were not good enough so I left my scores in a drawer. I recently rediscovered them whilst going through some old files.   So I decided to record these forgotten melodies.