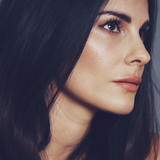 Generally billed just by her first name, Rebekah Teasdale is a DJ and producer from Birmingham, England who has been active since the mid-'90s. Like most figures of the Birmingham techno scene, her tracks are often hard, dark, and minimalist, with heavy pounding beats and gradual suspenseful development. An avid clubgoer since her youth, she began spinning records in 1996, at the age of 16. She spent several years as a model in order to provide financial support for her DJ career. She released an edit of the Mighty Dub Katz's house anthem "It's Just Another Groove" in 2004, but her first original productions, starting with 2007's "Toad in a Hole," were minimal tech-house. By the early 2010s, her sound had gotten darker and heavier, and she eventually caught the attention of Chris Liebing, who released Rebekah's Cycles EP on his CLR label in 2013. Continuing with releases on Cult Figures, Sleaze Records, and eventually Soma, Rebekah's productions became spacier and more experimental. Several EPs led up to the release of her debut full-length, Fear Paralysis, which was released by Soma in 2017. She developed a hybrid live/DJ set for her tour in support of the album. ~ Paul Simpson, Rovi