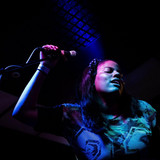 NOVA NEON's uniques brand of Heavy-Pop brings you dynamic and ambient groove based songs that are evocative and memorable. Their music is an intricate mix of syncopated beats, riffs and hooks, which when coupled with a soulful vocal make them one the most captivating acts around. NOVA NEON’s first single, the dark and jagged ‘Geek Freak’ showcases the group’s musical DNA of strong melodies and ambient mood, whilst their 2nd single ‘Stone To A Balloon’ establishes their ability to write genre-defying pop-ballads. Both songs received excellent reviews including Afropunk and Penguin Original who now sponsor the group as an Original Icons artist. Other highlights include, features on BBC London and Amazing Radio, airplay from over 30 regional and digital stations in the UK and worldwide, TV broadcast of their music videos, appearances on Vintage TV and a super unique Virtual Reality music video project recorded at Abbey Rd Studios. The band has headlined iconic venues such as The Garage, The Barfly, 93 Feet East, The Borderline, played The Isle Of White Festival, and are a SoFar Sounds favourite. NOVA NEON are stepping back into the studio to record their 2nd alb rum this May 2020.