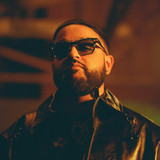 Punjabi-Canadian rapper and producer NAV rides hypnotic trap beats with his wavy sing-rap flow, crafting a sonic blend that draws upon styles similar to contemporaries such as Post Malone, Rae Sremmurd, and Drake. After reaching Canadian and U.S. chart peaks with the mixtapes NAV and the Metro Boomin collaboration Perfect Timing, he issued his official studio debut, Reckless, in 2018. He topped the Canadian Albums Chart and the Billboard 200 the next year with Bad Habits, and did the same in 2020 with Good Intentions. Born Navraj Goraya in Toronto, he had his first taste of fame when reality TV star Kylie Jenner posted a Snapchat video of herself singing along to his song "Myself." The mysterious star had been steadily building a large following through a string of releases via his SoundCloud account, beginning in 2015 with "Take Me Simple." Along with the Jenner endorsement, NAV accumulated a number of high-profile connections that propelled his career forward. In January 2016, his track "Take Me Simple" was featured on fellow Canadian Drake's OVO Sound Radio on Beats 1, and later that same year he appeared on -- and in the video for -- hip-hop star Travis Scott's single "Beibs in the Trap." With his profile steadily increasing, he signed to XO, the Canadian record label founded by the Weeknd. NAV's self-titled mixtape appeared in early 2017, and it was chock-full of his by-now-trademark silky vocals and slick beats. The release was preceded by the lead single "Some Way," which also featured the Weeknd. That same year, he also put out the Perfect Timing mixtape, on which he collaborated with Atlanta-based producer Metro Boomin. NAV's single "Wanted You," which featured Lil Uzi Vert, charted on Billboard's Top 100 and he followed up in early 2018 with the solo single "Freshman List." Both tracks were featured on his debut studio album, Reckless, which was released on XO and Republic in May of that year. Landing in the U.S. Top Ten, the set featured guests Quavo, Travis Scott, Lil Uzi Vert, and Gunna. Less than a year later, NAV made a quick turnaround with sophomore follow-up Bad Habits, which debuted at number one on the Canadian Albums Chart and the Billboard 200. Gunna returned alongside Meek Mill, Young Thug, Lil Durk, and XO label founder the Weeknd. NAV's third studio album, Good Intentions, arrived in May of 2020. The record continued with the regular host of featured artists, with contributions from Future, Pop Smoke, Travis Scott, and other top-name rappers. [Three days later, the expanded Good Intentions (Brown Boy 2 Deluxe Edition) arrived with an album's worth of bonus material designated as a commercial mixtape. This helped push NAV back to the top of the Canadian Albums and Billboard 200 charts.] The rapper closed out the year by teaming up with Wheezy for collaborative tape Emergency Tsunami. ~ Bekki Bemrose, Rovi