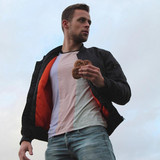 Joey Peters, better known as Joey Delvaro aka "The Dutch Cookie" is a 21 years DJ / Producer who takes you along in his world of passion and love for music.   His career started in 2010 as an 11 year old DJ. 2 years later, besides DJing he also started focussing on producing music.   Joey made his debut as a DJ in 2014 in "Club Manhatten" in Arnhem, shortly after clubs as "Hedon" in Zwolle, "Tivoli" in Utrecht and the "Westergasfabriek" in Amsterdam followed.   2015 was the year in which Delvaro signed his first record deal for his first EP release at American recordlabel "Sheeva Records".   In the year 2017 Joey was accepted into the Dutch Pop Academy in Utrecht and has taken big steps towards achieving his goals since then.   Now 2021, Joey Delvaro plays in clubs and at festivals throughout the Netherlands on a weekly basis, has won multiple DJ contests and is currently signed in 5 different countries for his musical productions.   He is ready to conquer the world with his passion and love for music.   "Music makes life worth living" - Joey Delvaro.