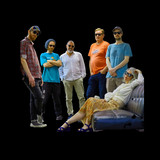 Based in Poneke Aotearoa - New Zealand 6 piece Blue River Baby were formed in 2016, meeting thru friends in the vibrant Wellington music scene & study at Wellington's music schools. Each of the members has grown up blasting the greats of soul, funk, jazz, reggae and rock while playing as working musicians Together they've developed a signature sound & energy that gets people moving, helped along with solid musicianship, righteous vocals, juicy grooves, tightly focused songwriting with a focus on the environment & being sustainable. Highlights for the band include playing to 20,000 on NYE in Nelson, having their first album hit #1 on the NZ Indie (IMNZ)Top 20 Album Chart & reaching #8 on the Official NZ Music Top 20 Album Chart in 2019. Going viral with a track on Tiktok and YouTube with 500,000 combined plays in 2020, and receiving airplay on both commercial & student radio, including having their video for PAY premier on Radio NZ Music in 2021 and playlisted on New Zealand's Juice T.V BRBB is set to release their new dreamy summer reggae dub single ''Green Cones''