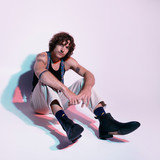 A distinct vocal tone, big guitars, and even bigger choruses. Earworm after earworm, Jacob Fitzgerald is taking the Australian music scene by storm. With his upbeat personality, captivating stage presence and band musicality, it is clear there is a long career ahead of the 22-year-old. Beginning his career as the modern-day Singer/Songwriter, Fitzgerald hooked listeners with his debut single ‘Adore Ya’ in early 2018. Obtaining a loyal fanbase off his first release, Jacob followed up with likeminded tracks on his debut EP, ‘Whole & Broken’. The seven-track project illustrates beautiful stories of love, heartbreak and loss. With smooth melodies and captivating arrangements, Jacob’s love for music and songwriting was clear from the get-go. After a year of postponed and cancelled shows in 2020, Fitzgerald took the forced time to explore new sounds and genres. Through extensive demos and collaborating with his band, Jacob made the transition into the Pop/Rock field of Australian music. Mid 2021 saw the release of ‘Pretty Good for My Mind’, an upbeat, highly energetic ode to his parent’s that highlighted the new trajectory for the team. Marking the first single from his second EP, ‘Pretty Good for My Mind’ demonstrates that whilst Fitzgerald is the front man of this unit, the band plays a key role in the music they’re producing. With punchy drums, wicked basslines, ripping guitars and elegant keys, the second seven-track project from Jacob Fitzgerald is not one to miss.