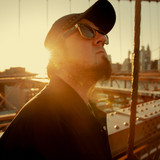 is a polish guitarist, composer, singer, songwriter, and producer. Robert earned the status of one of the best polish guitarist who was awarded with gold and platinium certification. He worked with many top Polish artists through out the world, he performed in Japan, Turkey, France, England, Italy, United Kingdom and Maurtius. He supported Lenny Kravitz, N.E.R.D. and Jamiroquai as a band leader of 'Chilli' and 'June' bands. In 2018 he released his solo album "SMACK" mixing elements of folk, hip-hop, synth pop and rock . It's a clash of several musical worlds, wrapped in original, uncategorisable compositions.