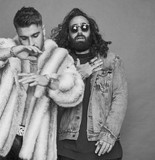 Art should be polarizing. It should provoke some sensibilities and excite others. It shouldn’t just toe the line and be safe. Where’s the fun in that? Besides, it’s the artists that shake things up who we really care about, from Jim Morrison and Axl Rose to Kanye West and Trent Reznor. That brings us to The Blancos. As the story goes, the duo—Cory Hueston and Jayson Robbins—got their name from a homie of theirs during the months spent recording at a Brownsville studio in Brooklyn. They rolled up as literally, “The Blancos,” but could hang nonetheless. Since then, they’ve ingested way too many drugs, wrote not enough songs, and slept on just the right amount of floors to earn Rockstar stripes. According to The Blancos, you should just take a listen, but the best way to describe their music is sex, drugs, and 808s. They’re the distillation of the last bit of genuine energy left in milquetoast indie and so-called alternative scene.